The first programmers of the CSIR Mk1 were Geoff Hill and Trevor Pearcey. Geoff Hill had perfect pitch and came from a very musical family. Hill was the first person to program the CSIR Mk1 to play a musical melody. It was played publicly for the first public exhibition of the computer on the 7th to 9th of August in 1951, at the inaugural Conference of Automatic Computing Machines in Sydney.

The sound production technique used on the CSIR Mk1 was as crude as is possible to imagine on a computer. Raw pulses of the computer’s data words were sent to an audio amplifier with a speaker attached. However, this occurred when there were no digital-to-analog converters, there was no digital audio practice and little in the way of complete digital audio theories. In addition, the CSIR Mk1 produced music in real-time.

The musical pieces played by the CSIR Mk1 are not as musically inspiring as they might have been if composers had been involved in creating the music. The computer had a lot to offer composers of the time, any frequency and any rhythm could have been programmed so the many composers interested in microtonal works, or music with no rhythm or very complex rhythms, could have created some very interesting music. Now, the music is most interesting from the point of view of the application of computers to music as a general principle and for the early practice of computer programming to create music. The achievement is significant because of the imagination of the practitioners, to conceive of using the flexibility of a digital computer to make music and because of the ingenuity required to devise means to produce reliable sounds from the computer. It is difficult to appreciate now just how skillful these people were. It is significant that it was only two of the best programmers who managed to program the CSIR Mk1 to play music.

The CSIR Mk1 operated in Sydney Australia from about November 1949 to June 1955. Geoff Hill was the main programmer at that time and he used the machine to play musical melodies. These melodies, mostly from popular songs, were; ‘Colonel Bogey’, ‘Bonnie Banks’, ‘Girl with Flaxen Hair’ and so on.

The CSIR Mk1 was dismantled in mid 1955 and moved to The University of Melbourne, where it was renamed CSIRAC. Professor of Mathematics, Thomas Cherry, later Sir Thomas Cherry FRS, had a great interest in programming and music and he created music with CSIRAC. In Melbourne the practice of how CSIRAC was programmed for music was altered and refined somewhat. The program tapes for a couple of test scales still exist, along with the popular melodies ‘so early in the Morning’ and ‘In Cellar Cool’, which was a popular drinking song — it appears that the pursuit of computer music and social drinking have been intimately linked since the earliest years. There was also other music on the tape. In about 1957 Cherry wrote a music performance program that would allow a computer user who understood simple standard music notation to enter it easily into CSIRAC for performance, without negotiating all of the timing problems such as was normally required. The music itself may now seem very crude unless it is understood in the context of its creation. It was created by engineers who were not knowledgeable of the latest in musical composition practice and at a time when there was little thought of digital sound. The idea of using a computer, the world’s most flexible machine, to create music was a leap of imagination at the time. It is a pity that composers were not invited to use CSIRAC, as they were with the Bell Labs developments, to discover how it could have solved several compositional problems. 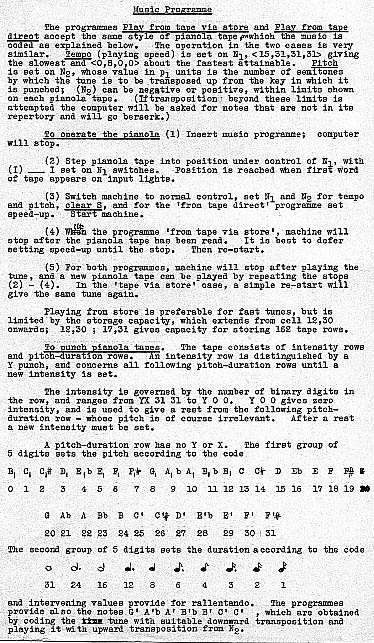 Cherry’s instructions for the Music Programme. N1, N2 and I are registers that are set with console switches. 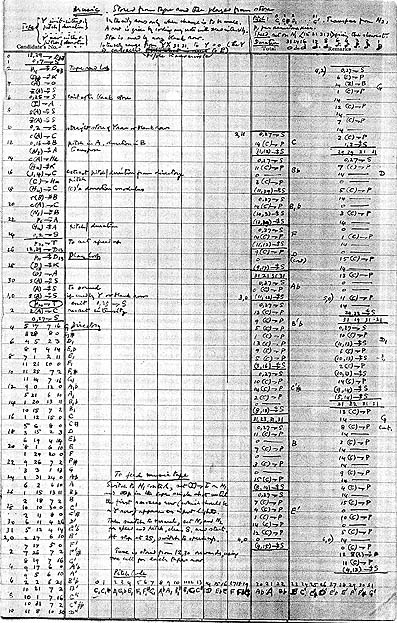 The first page of Cherry’s notes for the Music Programme. Part of the program is on the left and the note data is on the right hand side of the page. The list of notes at the bottom (Pitch Code) is correct, but in the previous instructions for the program they are transposed.

Contemporary accounts in the press

CSIRAC made news headlines sometimes in its time. Below are extracts from two articles that mention the music.

CSIRAC — the University’s giant electronic brain — has LEARNED TO SING!

…it hums, in bathroom style, the lively ditty, Lucy Long. CSIRAC’s song is the result of several days’ mathematical and musical gymnastics by Professor T. M. Cherry. In his spare time Professor Cherry conceived a complicated punched-paper programme for the computer, enabling it to hum sweet melodies through its speaker… A bigger computer, Professor Cherry says, could be programmed in sound-pulse patterns to speak with a human voice…

…When CSIRAC began sporting its musical gifts, we jumped on his first intellectual flaw. When he played “Gaudeamus Igitur,” the university anthem, it sounded like a refrigerator defrosting in tune. But then, as Professor Cherry said yesterday, “This machine plays better music than a Wurlitzer can calculate a mathematical problem” …

Reconstruction of the music played by CSIRAC

School of Computing and Information Systems